Pease pudding is a peculiarly British dish, on account of the long-standing perference in Britain for pease over other pulses. It began its career in remote antiquity as pease pottage, a thick porridge made from the dried mealy pease that were a staple food; this was the most usual way of preparing them. Pease pottage and, when available, bacon went together in the diet .  At the beginning of the 17th century the introduction of the pudding cloth allowed pease pudding, a more solid product, to be made. The ingredients consisted only of pease (previouly soaked, if dried pease are used),  flavouring: sugar and pepper, and sometimes mint, were commonly used. The ingredients were mixed and simply cooked in a pudding cloth perhaps alongside a piece of bacon, and for which the pudding would be a  filling accompaniement. 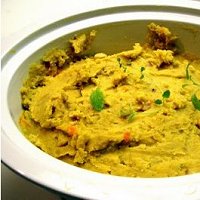 1. Place the soaked peas in a pan with fresh water Add the salt, pepper,
herbs and onions, bring to the boil then cover and simmer very gently
for 2 1/2 hours adding more water if necessary.

2. Strain of any excess water and remover and discard the herbs and onion.
Pass the peas through a sieve or beat hard to break them up. Beat in the
egg and butter and season well.

3. Put into a greased heatproof pudding basin, cover with foil and steam for 1 hour.