What makes puff pastry so light and crispy? Well, the secret is in the folding. Puff pastry is made by placing chilled butter (or sometimes lard *) between sheets of dough, then folding and rolling it many times to create hundreds of layers. As it cooks, steam lifts and separates the layers, resulting in a crisp, flaky pastry. 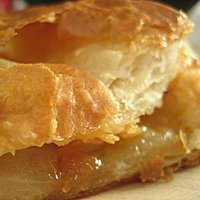 1. Place the flour and salt in a large bowl. Use your fingertips to rub the lard into the flour
until it resembles fine breadcrumbs.

2. Add the water and use a round-bladed knife to stir until a dough forms. Turn dough onto a
lightly floured surface and gently knead until just smooth. Cover with plastic wrap and place
in the fridge for 30 minutes to rest.

3. Use a lightly floured rolling pin to roll out the dough to a 10 x 30cm rectangle. Place butter
between 2 sheets of plastic wrap and tap with a rolling pin to make a 8 x 9cm rectangle. Lay
dough on a lightly floured surface with a short edge closest to you. Remove the plastic wrap
from the butter and place in the centre of the dough. Fold the end closest to you over the
butter, then fold the opposite end over the top (the butter should now be enclosed in the
dough).

4. Turn dough 90° clockwise and gently press edges together. Use a lightly floured rolling pin to
gently tap to flatten butter. Roll out dough to a 10 x 30cm rectangle and repeat folding
process as before. Cover with plastic wrap and place in the fridge for 30 minutes to rest.