An apple dumpling is a pastry filled with apple, cinnamon and occasionally raisins. Apples are peeled and cored, placed on a portion of dough, then filled with cinnamon and sugar. Then the dough is folded over the apples and the dumplings are baked until tender. 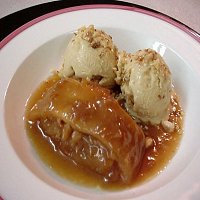 Pre-heat the oven to gas 4, 180 centigrade.  Prepare the suet crust by sifting the flour, baking powder and salt into a large mixing bowl.  Add the suet and enough water or milk to bring everything together to form a firm but rather dry dough.  Roll out the dough on a floured surface to around 5mm in thickness and cut into rounds big enough to cover the apples.
Place an apple on the round of dough and fill the middle with some castor sugar, 1 clove and few sultanas, currents or raisins.  Moisten the edges of the dough and bring it up around the apple covering it completely.  Press the join gently to make sure it is well sealed.  Turn the apple over joint side down on to a well greased backing tray or tin and bake in the oven for 30 - 40 minutes.  Serve with custard, cream or warm
Accompaniments