The origins of the tart are not clear, however the generally accepted story is that it was first made by accident in 1820 when the landlady of the White Horse Inn, (now called the Rutland Arms) left instructions for her cook to make a jam tart. The cook, instead of stirring the eggs and almond paste mixture into the pastry, spread it on top of the jam.[1] When cooked the jam rose through the paste. The result was successful enough for it to become a popular dish at the inn, and commercial variations, usually with icing sugar on top, have spread the name.[2] The name is believed to have come from a customer who decided that the tart was "baked well" thus the inn called it their "Bakewell" tart, a pun on the town of Bakewell and a well baked tart. 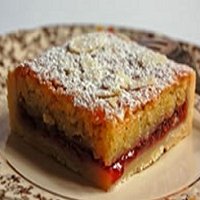 Pre-heat the oven to Gas 6, 200 centigrade. Start by making the pastry.  Sieve the flour into a large mixing bowl.  Cut the butter and lard into cubes and add to the bowl with the salt.  Rub the butter and lard into the flour with your fingertips until crumbly and well incorporated.  Sprinkle approximately 2 tablespoons of water all over the mixture and begin blending together with a pallet knife or round bladed knife.  Carefully add a little extra water if you feel the mixture is too dry but only a little at a time.  Bring the dough together with your hands and mould into a ball that leaves the bowl clean.  If you have any bits left in the bowl add a little more water to incorporate them.  Place the pastry in some cling film or foil and place in the fridge to rest for 20 - 30 minutes.

In a bowl mix the butter and sugar together until creamy and well combined. Stir in the egg and then add the ground almonds and almond essence. Mix well to ensure all of the ingredients are well combined.