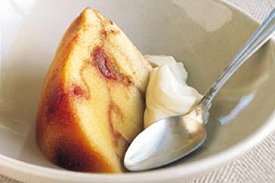 A pudding coming in many versions and sometimes under different names - but originating in France where it's called 'Poudin a la chanceliere'. Usually made with crystallised fruits placed in the bottom of a mould and filled with layers of sponge fingers (or macaroons) soaked in liqueur and bavarois with glace cherries, or currants and sultanas.


Turn out the pudding, with help of a palette knife, and pour a little of the sauce over. Serve the remainder of the sauce in a jug.